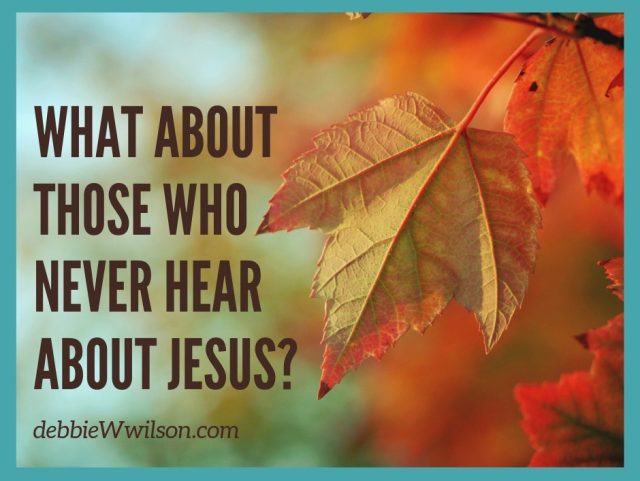 What happens to people who’ve never heard about Jesus after they die? Most of us have grappled with this question at some time. We all know people who don’t follow Christ and seem nicer than some who claim to know Him.

The Bible says God is not willing for any to perish (2 Peter 3:9). It also says, “It is by the name of Jesus Christ of Nazareth, …Salvation is found in no one else, for there is no other name under heaven given to mankind by which we must be saved” (Acts 4:10, 12 NIV). What does that mean for “good people” who’ve never heard about Christ?

The Scripture is God’s revelation of truth. Yet even though Jesus fulfilled every Scripture concerning the Messiah, people still argued over His identity. People had, no doubt, emphysized one aspect over another, and He was not what they’d expected. Jesus’ own disciples didn’t understand His predictions of the crucifixion and resurrection until after He was glorified.

Many future events won’t become clear until Jesus returns (1 Cor. 13:12). But when He returns, the final judgement will align with Scripture.

No answer will satisfy those who toss up theological arguments as diversions to avoid facing their own state of being. But Jesus has promised, “Anyone who wants to do the will of God will know whether my teaching is from God” (Jn. 7:17 NLT). So, let’s see what Scripture says.

Who Goes to Heaven?

No one willingly chooses a gang-infested neighborhood to raise their families. Instead, people fight to move out of violent environments. If drug lords move into neighborhoods, the quality of living goes down. Being in a good neighborhood won’t make bad people good. Sin, not goodness, is contagious (1 Cor. 15:33).

Heaven is a gated community. To say God should let everyone into heaven is like inviting rapists, murderers, and drug lords to live next door. Eden shows how it took only two people to ruin a perfect world.

#Heaven is a gated community for God and His family. Join the family. John 1:12 tells you how. Click To Tweet

God knew the ruin eating the forbidden fruit would bring to the first couple and to His world. He knows the impact sin does to a soul that allows it to fester. But we underestimate its destructive power.

God has every right to protect His home and family. Only those who belong to God’s family are allowed to live with Him in His home. To qualify for heaven, we must be adopted into His family. He extends the invitation to everyone. But only those who receive Him are brought into His family (Jn. 1:12).

The Hurdle of Sin

Seven times in a couple of sentences the Bible makes clear there is not even one person who is inherently good or seeks God. Not the sweet old lady in the nursing home and not the cute toddler. Every human enters the world with a bent toward sin and the need for a Savior. If Jesus was optional, God would have allowed Jesus to skip the cross when He asked to let that cup pass from Him.

But I’m Not that Bad

I’ve met people who didn’t think they had a sin problem. When I asked how they would feel if they knew everything they’ve thought, said, or done in the past year would be on the evening news for the world to see, they cringed. In our hearts we know, “all have sinned and fall short of the glory of God” (Rom. 3:23 NIV).

The Bible doesn’t teach reincarnation. This life is our one chance to choose salvation.

In our day of smart phones, it’s not hard to imagine God playing a video recording of our every thought and deed at judgment. He won’t have to say a word. Our own words will testify for or against us.

Whose Goodness Will You Trust?

Those who’ve received God’s gift of salvation have no fear of judgment (1 Jn. 4:17). Jesus already paid for our sin on the cross. We stand before God on the basis of Christ’s righteousness—not our own (Rom.5:1; 1 Jn. 3:2).

That means no matter how badly we’ve messed up, Jesus’ goodness is bigger than our worst sin. The only sin that won’t be forgiven is never receiving Him.

What About Those Who Haven’t Heard?

The Bible provides this amazing glimpse of heaven.

After this I looked, and there before me was a great multitude that no one could count, from every nation, tribe, people and language, standing before the throne and before the Lamb. They were wearing white robes and were holding palm branches in their hands. And they cried out in a loud voice:

Heaven will be populated with people from every tribe and tongue. God found Abraham living in a pagan family worshiping pagan gods. Abraham believed God and was made right with Him.

Jesus went out of His way to talk with a Samaritan woman who practiced a hybrid religion (Jn. 4). She believed in Jesus and told her whole town. Jesus is the shepherd who leaves the 99 to find the one lost sheep (Luke 15:3-7).

#Jesus is the shepherd who leaves the 99 to find the one lost sheep (Luke 15:3-7). #salvation Click To Tweet

The book, Eternity in Their Hearts, tells of a missionary who visited a remote tribe. After telling them about Jesus, the tribe said they already knew Him, they just didn’t know His name.

Jesus bridged the gap between heaven and earth so that we can know Him. The heavens declare His glory so that we are without excuse. His arm is not too short to save. But we must call on the name of the Lord.

We can worry about what will happen to those who haven’t heard, or we can work to help them hear (Rom. 10:17).

It is impossible for the finite to comprehend the infinite. So the issue boils down trust, not understanding. Can we trust the character of God?

Who is wiser, you or God? Who is more loving, humans or God? Who knows what’s in a person’s heart?

Of course the answer is obvious. When we remember Jesus’ love and goodness we know we can trust Him with what we don’t understand.

Oh, the depth of the riches of the wisdom and knowledge of God!
How unsearchable his judgments,
and his paths beyond tracing out!” (Rom. 11:36 NIV).

Photo by Aaron Burden on Unsplash