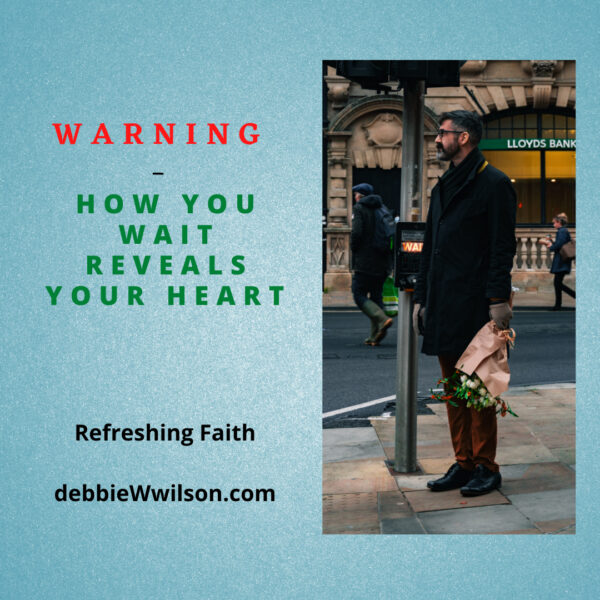 No one I know likes to wait. Last week I tried to switch cell phone carriers. Each call ended with, “I’m sorry, but your carrier put your account on hold for 24 hours. Please call back tomorrow.”

This happened five days in a row. I decided to put this task on pause.

Over a two-week period, I met people waiting for:

Waiting often draws sighs, pacing, foot tapping, and grumbles. Some people lash out in anger and panic, like some disgruntled passengers when their flights are delayed. (Our daughter works in reservations for an airline.) If we’re not careful, we do things we later regret like Sarah who offered her maid Hagar to Abraham in Genesis 16.

We can become so preoccupied with waiting that we miss life in the meantime. It feels like the wait interrupted God’s perfect plan for our lives. We can’t imagine the wait to be part of His plan.

Age has mellowed me, but I still fall on the impatient side of the scale. Maybe that’s why a story tucked away in I Samuel 13 jarred me.

Philistine soldiers, as numerous as the sand, assembled against Israel. Israel’s soldiers saw their gathering enemy and quaked in fear. The prophet Samuel promised King Saul he’d come in seven days to make offerings to the Lord before the battle. During the seven-day wait Saul watched his own soldiers hide in caves and thickets while the enemy continued to gather in force.

Saul remained at Gilgal, and all the troops with him were quaking with fear. He waited seven days, the time set by Samuel; but Samuel did not come to Gilgal, and Saul’s men began to scatter” (1 Sam. 13:7-8 NIV).

Day seven dawns. No Samuel. His men are scattering. What would you do? I can imagine Saul’s reasoning. It’s been seven days. I can’t wait any longer. I won’t have any soldiers left to fight.

Saul felt “compelled” to make offerings himself. He finished the offering as Samuel arrives.

You acted foolishly, you have not kept the command the Lord your God gave you; if you had, He would have established your kingdom over Israel for all time. But now your kingdom will not endure; the Lord has sought out a man after His own heart and appointed him leader of His people, because you have not kept the Lord’s command” (1 Sam. 13-15 NASB).

Saul’s desire to win the battle was good, but when his way of winning overshadowed the highest priority—to love the Lord with all your heart—his goal became his undoing. Good goals not executed God’s way and in God’s timing expose heart problems.

Isaiah 28:16 reminds us that those who trust in God won’t be in a hurry. Where are you struggling with God’s timing? Where does God seem slow or late? A heart that seeks after God learns to trust His timing.

Where are you struggling with God’s timing? A heart that seeks after God learns to trust His timing. #trust, #BigGod Click To Tweet

Therefore this is what the Lord God says:

‘Behold, I am laying a stone in Zion, a tested stone,
A precious cornerstone for the foundation, firmly placed.
The one who believes in it will not be *disturbed [Lit in a hurry]’” (Isaiah 28:16 NASB).

Ok, time to call Spectrum and be put on hold again while they contact my current carrier one more time. Lord, grant me patience—and favor!