I made a shocking discovery about myself this week. In Made to Stick, Dan and Chip Health tell the story of a third grade teacher who wanted to erase prejudice in her students. Martin Luther King, Jr. had just been assassinated. This teacher wondered how she could help her class really grasp the tragedy of prejudice.

One morning she told her class that brown eyes were better than blue. She moved all the blue-eyed students to the back of the room. They had to wear collars so they could be recognized from a distance. Brown eyes were given a longer recess. 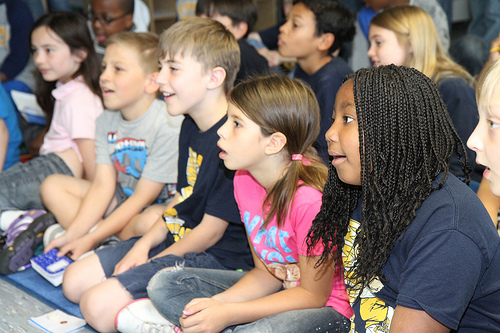 The teacher noticed something else. That day the blue-eyed children were faster on their spelling drill

“Why were you so slow yesterday?” she asked.

“Because all I could think about was those collars,” one blue-eyed student said.

Hearing this story caused me to ask myself what hidden prejudices I might have? The answer shocked me.

I’d just returned from a wonderful conference where I’d been inspired and learned a lot. But I’d also left feeling ancient next to the younger participants who were light-years ahead of me in their knowledge of technology, marketing, and social media. I felt like I’d pulled up to a jet fueling station in my horse and buggy. And while their spaceships intrigued me, I wasn’t sure I could—or wanted to—drive one.

Paul wrote to Timothy. “Let no one despise you for your youth, but set the believers an example in speech, in conduct, in love, in faith, in purity” (1 Timothy 4:12, ESV).

I’d turned Paul’s words upside down. I was looking down on myself for my lack of youth.

I remembered the words of the third grade children. They couldn’t do the spelling because all they could think about were those collars.

As long as I focused on some perceived negative aspect of myself, I would sabotage my ability to learn and grow. Paul’s words applied to me. “Debbie, don’t despise your lack of youth, but ‘set the believers an example in speech, in conduct, in love, in faith, in purity.’”

By God’s grace, I can do that. And if I get those things right, I believe God is able to make up for what I lack in other areas.

Who are you looking down on? We shouldn’t look down on anyone, even ourselves. Prejudice sabotages success.