When author Sallie Hite McDaniel went back to school as an adult, she discovered that some professors promote an agenda rather than an education. If you or someone you love is headed off to school, use her experience and tips to thrive even in hostile classes. Here’s Sallie: 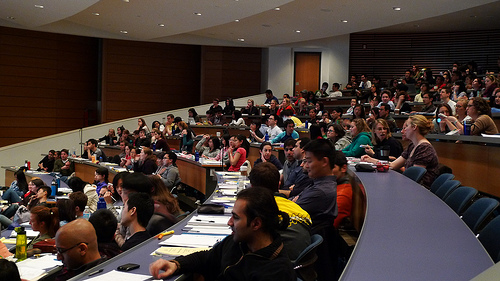 It’s an unfortunate fact that many people develop addictions in college. It happened to me. Cravings began in July and reached fever pitch by tax-free weekend in August. I couldn’t resist a colorful display of highlighters and Post-its, which I bought by the twelve-pack. I was a school supply junkie. The joy a compulsive list-maker receives from marking off tasks pales in comparison to the exhilaration of ripping Post-Its from a wall!

Every fall my bookbag grew heavier. In 2006, I discovered a burden, which was far weightier than the heaviest biology textbook, when I began taking “Contemporary Moral Philosophy,” which was neither contemporary nor moral.

The professor began by asking, “Why do human animals enjoy greater rights than non-human animals?” Ignorant that my professor was a lesbian activist, I answered, “Because God gave man dominion over animals.” Her response? “That depends on whether or not you believe in God.” She didn’t.

Lectures favored animal rights, homosexuality, and abortion. Some days we were assigned to watch appalling movies. The worst one showed a woman giving herself an abortion with a knitting needle. Before long, I felt like Christian in Bunyan’s classic, Pilgrim’s Progress, trapped in the Slough of Despond. I didn’t agree with the professor’s claims but was unable to defend my faith because I had never studied the Bible, despite the fact that I had attended church since birth. Except for Pre-Calculus, philosophy caused more mental anguish than any other course but, ironically, God used that atheist to show me my need for His Word. I’m so thankful!

College can be a lonely place for Christians. If you are a student, join a Bible study or campus ministry; there’s strength in numbers! As God reveals Himself to you, through His Word, record key verses that will encourage you during difficult days. Moses told the Israelites to “bind them [God’s commandments] as a sign on your hand…as frontlets between your eyes,” writing them on gates and doorposts of their houses (Deut. 6:8-9). Here’s where Post-Its come in handy!

Attach Scripture sticky notes to books, walls, mirrors, and as frontlets between your eyes, unless you are in the South where sweat prevents adhesion. In Pilgrim’s Progress, when Christian finally reached the Cross, his “Burden became loosed from his shoulders.” College days, like overstuffed bookbags, can be overwhelming, but I found that when I made Bible study a priority, God, Who is able to make time stand still, provided ample time for other activities.

–Sallie Hite McDaniel, author of Jesus is My Thesis: Cornerstone of the Church, Stumbling Block to the Academy