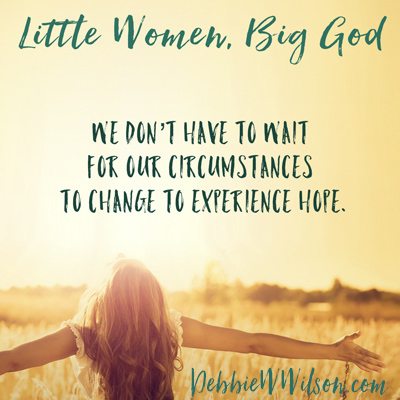 While some troubles are small, others are giants. And we never know when a giant will darken our door.

That’s why we need a Big God.

I’ve battled the health effects of being exposed to black mold for over a year. Thankfully, I feel stronger. But now I face another health battle. A sonogram and MRI showed a large mass that needs to be removed.

When my doctor referred me to an oncologist my giant changed names. Because cancer stole the lives of my parents, just scheduling an appointment with an oncologist at the cancer center caught my breath.

Friends and family members have called to ask if I know anything? “Waiting is so hard,” many have said. I know what they mean. We feel that if we know the name of our giant we can develop a plan and have peace.

Many giants bring their friend Money Pit along. My fear of these ugly monsters led me to a wonderful discovery hidden in the story of David and Goliath.

David was a youth when his father sent him to check on his brothers who were serving King Saul at war. An ordinary trip to deliver bread and cheese brought David face to face with a real giant.

“As he was talking with them, Goliath, the Philistine champion from Gath, stepped out from his lines and shouted his usual defiance, and David heard it. Whenever the Israelites saw the man, they all fled from him in great fear” (1 Sam. 17:23-24 NIV).

Over nine feet tall, well armed, and a champion warrior—is it any wonder that the mere appearance of this shouting giant terrified Israel’s armies? But the ogre that sent the army fleeing in fear only roused David’s resolve to stand and fight.

When King Saul heard David was willing to fight Goliath he focused on David’s youthfulness and inexperience.

Young or not, David knew his Big God!

Notice how he approached Goliath. “Then David said to the Philistine, ‘You come to me with a sword and with a spear and with a javelin, but I come to you in the name of the Lord of hosts, the God of the armies of Israel, whom you have defied’” (1 Sam. 17:45 ESV).

He didn’t even call Goliath by name. The name of the Lord was his shield and strength.

Friday, I learned my cancer antigen levels are normal. Praise God! But the doctor said I still need to see an oncologist. My high IgE levels and the stuff in my mass may still indicate a malignancy.

This week, let’s face our giants in the name of the Lord and not be intimidated by towering Cancer Centers or anything else we face. Our Shepherd walks with us, guarding, guiding all the way.

*Since posting this, I’ve had surgery, and it was benign. Glory to God!

Need a Mother’s Day gift? How about a signed copy of Little Women, Big God?  Join me this Thursday evening, April 28th, at Barnes & Noble in Cary, NC  at 7 p.m. where I’ll be speaking and signing my new book.

Enjoy the song “Some Trust in Chariots” here.