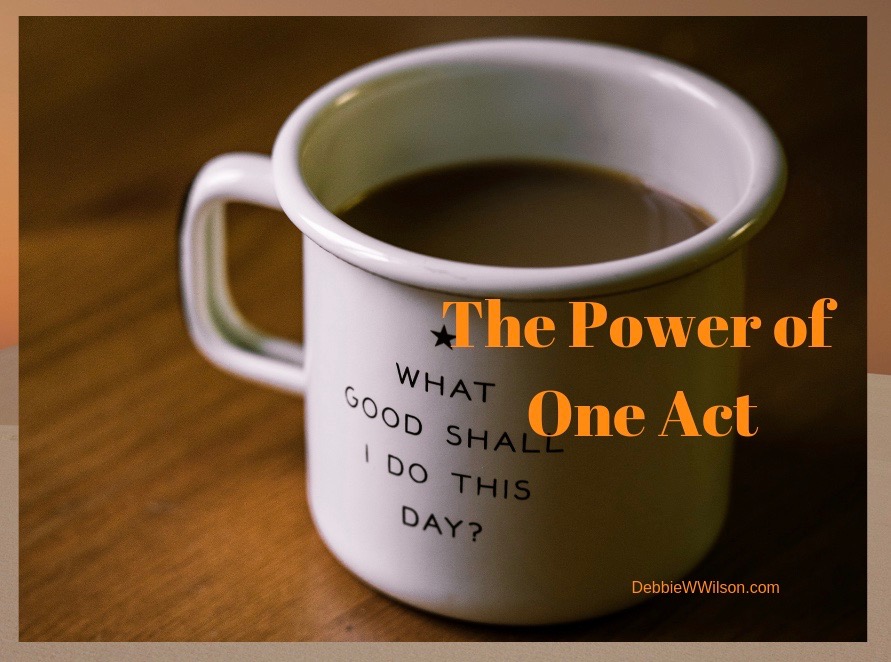 A neighborhood child, I’ll call Abby, who was also in my daughter’s first grade class, showed the effect of one person’s sin. Abby’s father left her mother—and her—for another woman. Abby’s anger and hurt spilled out on the neighborhood children and her classmates.

Who did this man’s adultery hurt? His wife and child obviously grieved. But my children also suffered. The sin committed by a man we’d never met disrupted our neighborhood and his daughter’s classroom.

Believing we can corral the consequences of our private sins is like throwing a flaming, gasoline-soaked rag into an apartment and being astonished when the whole building burns down.

Romans 5:19 contrasts the effect of Adam’s one act of disobedience with the impact of Jesus’ one act of obedience. Take heart, as we look at what those actions mean for us today.

Adam’s One Act of Disobedience

Adam and Eve began life in the Garden of Eden, a place of bounty and liberty. Beautiful trees laden with delicious varieties of ripe fruit surrounded the first couple. They could choose as much as they wanted from any tree—except one.

But the Lord God warned him, ‘You may freely eat the fruit of every tree in the garden—except the tree of the knowledge of good and evil. If you eat its fruit, you are sure to die’” (Gen. 2:15-17 NLT).

Satan overheard the command. Posing as a serpent he deceived Eve. After tasting the fruit and suffering no apparent harm, she offered some forbidden fruit to Adam.

The Bible says Adam was not tricked. He saw through the serpent’s lies. Yet he joined his wife in rebellion against God.

When Adam and Eve stood in the garden considering the fruit, they were the only two people on earth. What would it hurt to disregard God’s one limit? No one would know.

When Adam and Eve stood in the garden considering the fruit, they were the only two people on earth. What would it hurt to disregard God’s one limit? #temptation Click To Tweet

Sometimes, like them, we rationalize our disobedience. We tell ourselves, “Who will know? No one will get hurt.” We can’t fathom the effect our sin will have on ourselves and on people we have never met.

Adam didn’t have to worry about the animals squealing on them. His own guilt changed his very nature and broadcast his fall to God and creation.

Every human since Adam has suffered the incalculable suffering of sin and death. Not only do we physically die, we are born spiritually dead, separated from the life of God. Because of our darkened minds, apart from the grace of God, we don’t even know we’re dead. Rebellion against God is the human mode of operation.

Christ’s One Act of Obedience

Thankfully, the story doesn’t end there.

When we were utterly helpless, Christ came at just the right time and died for us sinners” (Romans 5:6 NLT).

“Through the obedience of the one man [Jesus] the many will be made righteous” (Romans 5:19 NIV).

Who had the harder assignment?

On the night of His betrayal, Jesus counted the cost of obedience and prayed, “Father, if you are willing, take this cup from me; yet not my will, but yours be done” (Luke 22:42 NIV).

Jesus was about to become sin and suffer the just punishment every sin since the beginning of time to the end of time has earned. Think how disgusting and painful it is to just hear of some crimes. Imagine blameless Jesus becoming those sins.

But there was no other way to satisfy God’s justice and love. So, Jesus willingly drank the cup of God’s wrath to the last drop. Then He cried out, “It is finished!” Jesus drank every drop of condemnation our sins deserved.

Jesus’s obedience accomplished “much more” than Adam’s disobedience. Because of Jesus we can live in victory through faith in God’s gift of grace and righteousness in Christ.

Jesus’ one act of obedience overturned the condemnation that followed Adam’s sin. He became sin for us so that we might become the righteousness of God in Him. #Savior, #Redeemer Click To Tweet

When Jesus counted the cost He saw the joy beyond the suffering. Joy always rewards obedience.

How Do We Apply This?

Living in condemnation and regret does not honor Jesus. But appreciating His gift of righteousness does. When condemning thoughts threaten us, we remember Jesus’ obedience covered that sin too!

Photo by Nathan Lemon on Unsplash