I don’t mean to rant. But I get distressed when well-meaning people pass on teaching that hurts innocent people.

I believe in submission. Someone must take the helm or chaos erupts and needs are overlooked. I just don’t buy the rot that’s taught as biblical submission.

A dear woman said, “We need strong men. Every wife should tell her husband, ‘I’m in your corner no matter what. I’ll follow wherever you lead.’” When I gave some real life examples of couples I’ve worked with, she saw another side.

Psalms 119:160 says, “The sum of Your word is truth.” Scripture makes sense only in the context of the whole.

I was part of a church that held my friend’s philosophy. In a committee meeting I expressed a thought different from the pastor’s. Afterwards a man said, “Give the preacher what he wants. He’s the preacher.”

The committee was to come up with plans that served the flock—not stroke the pastor’s ego. The discussion helped us discover the best plan. As a leader, I’d be appalled if my committee wasn’t free to share their opinions.

Another leader called herself “God’s anointed” to justify her control. Even in the Old Testament there were three offices—king, prophet, and priest. The priests had to confront King Uzziah when he became strong and proudly overstepped his role. (2 Chron. 26:16-23) 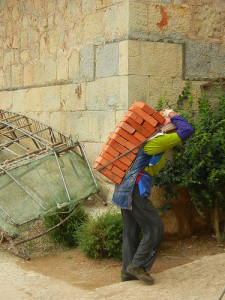 A marriage study used the curse (Gen. 3:16-19) to validate this view of submission. Male headship in marriage isn’t a curse. When marriage was instituted the focus was on unity—becoming one—not one dominating the other (Gen. 2:23-24). Male oppression of women happens in cultures and homes dominated by sin.

If the curse represents the ideal of submission, then logic demands we ban pesticides, herbicides, and the use of anesthesia in childbirth and embrace the whole curse. Ephesians 5:17-31 is a better passage for understanding marital submission. In the original text the word submit isn’t in verse 22. It is implied from the previous verse, reinforcing the need for context and understanding of how submission looks for each party.

Jesus is our example of godly leadership and submission. Concerning leadership He said, “You’ve observed how godless rulers throw their weight around, how quickly a little power goes to their heads. It’s not going to be that way with you. Whoever wants to be great must become a servant. Whoever wants to be first among you must be your slave. That is what the Son of Man has done: He came to serve, not be served—and then to give away his life in exchange for the many who are held hostage.” Matt. 20:25-25 MSG

Godly leaders care about the needs of those they shepherd. Good sheep honor their leaders, but don’t put them in the place of the Good Shepherd.

“Be responsive to your pastoral leaders. Listen to their counsel. They are alert to the condition of your lives and work under the strict supervision of God. Contribute to the joy of their leadership, not its drudgery. Why would you want to make things harder for them?” (Heb. 13:17, MSG)

Years later, the preacher I was told to acquiesce to certainly became “strong.” He became a wolf that ravaged his flock and devoured those who served him. The controlling female leader forsook the faith. Godly strength is shown in humility. We understand our role by understanding God’s heart.

Question: What’s your view of biblical leadership and submission?