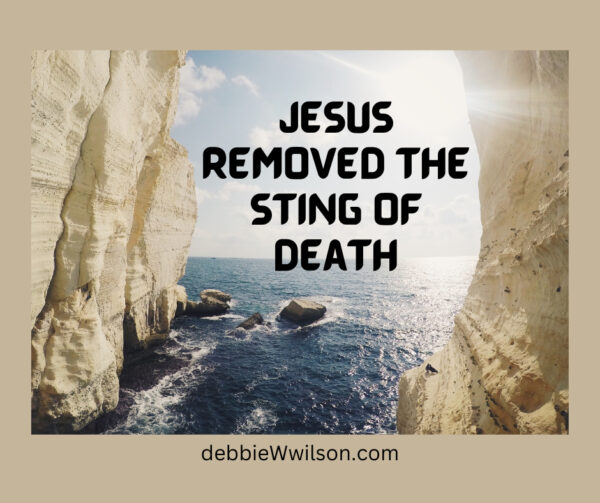 Screams from the car’s backseat jolted author Frank Peretti as he drove his family. A bee buzzed around his allergic son. Gripping the steering wheel with one hand, Peretti snatched the bee with his other. After a moment, he released it.

“It can’t hurt you anymore,” Peretti said, opening his hand to show the stinger embedded in his inflamed flesh. Just as Peretti’s hand showed he had taken the bee’s stinger, so Jesus’s scarred hands and feet show he has taken death’s sting.

Why Is the Day Jesus Died Called Good Friday?

When I was a child, I asked my mother why we call the day Jesus died “Good Friday.” She didn’t know. But now I know. My sins deserved hell, and on the day Jesus died, he took my hell so I could have his heaven. That’s good for me!

The Apostle Paul wrote, “When the perishable has been clothed with the imperishable, and the mortal with immortality, then the saying that is written will come true: ‘Death has been swallowed up in victory. Where, O death, is your victory? Where, O death, is your sting?’ The sting of death is sin, and the power of sin is the law. But thanks be to God! He gives us the victory through our Lord Jesus Christ” (1 Cor. 15:54–57).

The Sting of Death

I used to think this verse should read, “The sting of death is grief,” because that is what we feel when we lose someone. However, the sting in this verse refers to those who die, not to those who mourn.

Strong’s concordance says death means the death of the body with the implied idea of future misery in hell. The sting of death is sin. Those who die in their sins will feel that sting throughout eternity in hell.

But Christ took our sins on the cross (2 Cor. 5:21). He suffered the punishment we deserve. Now at death a believer’s mortality is clothed with immortality. “Death has been swallowed up in victory.”

Christ turned physical death into the gateway to heaven. This week a friend echoed this hope when she shared her husband’s last words before he slipped into eternity. “Wow, wow, wow. It’s all true! All of it…. All the love, incredible.”

Great Britain and many around the world mourn the loss of Queen Elizabeth II. Like Joseph who grieved when his father Jacob died, we all grieve the loss of our loved ones who’ve gone ahead. But for those arriving in heaven, it’s a different story. They’re celebrating with the One who secured their eternity by removing the sting of death.

Photo by Vitaliy Paykov on Unsplash