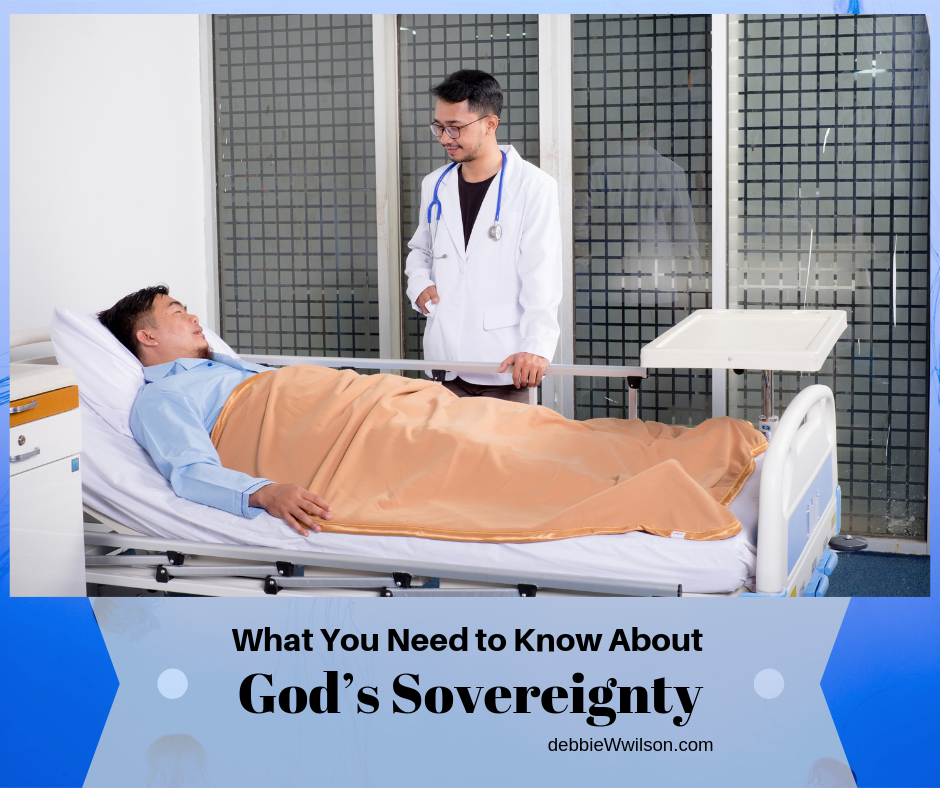 When a fictional protagonist acts out of character, I know I lack the full picture. Yet, when the actions—or lack thereof—of someone I love injure me, I’m offended. They should know better.

Why do I give made-up characters slack and assume the worst about those I know well? I’m not alone in this. Many of us do it with God.

The actions of a TV character don’t affect us. But we feel the effect of a careless word or action. And since these people know us, shouldn’t they know how their choices will affect us? Our hurt feelings squelch reason, and we forget what we know to be true.

God’s sovereignty is a topic that stirs such emotions. It brings great comfort to some to know God has supreme power. We know if God allows something, no matter how wrong it appears, He is working behind the scenes for a greater good. But for those suffering a terrible loss or injustice, the topic causes confusion.

If God has the power to stop wrong, why does He allow it? If God foreknew the drunk driver would be on the road, why didn’t he delay your child’s bus trip? Why would He waste your time and money on a mystery illness if He could heal it?

The Bible reveals divine sovereignty, human responsibility, and an earth under the curse of sin and rule of Satan. As humans we try to tease these apart and wonder how they fit together.

This is one of the unfathomable mysteries of Scripture. Our finite minds cannot grasp an infinite God or His ways any more than a child can understand the ocean by dipping a pail into it.

Oh, how great are God’s riches and wisdom and knowledge! How impossible it is for us to understand his decisions and his ways!” (Rom. 11:33 NLT).

The Example of Joseph

Many aspects of a story and a life don’t make sense in the middle of it. Take Old Testament Joseph for example. Genesis tells his story from a human perspective.

We’re glad God stepped in at the last minute to stop Joseph’s bad luck. Or was it bad luck?

Joseph told his brothers that what they meant for evil, God meant for good. But—the story doesn’t end there.

God Is Bigger Than a Lifespan

No one can fully comprehend the purpose of suffering while on earth. But the Bible makes it clear that we can’t lose a hair on our head without God knowing it. If our sovereign God allows pain into our lives, we can trust He is using it for our eternal good.

When we arrive in heaven and see this life from God’s perspective, we won’t ball up our fists and say, “I knew you messed up with my life.”

No, we’ll worship and say, “Wow! How did You do that? This is so much better than I could have imagined.”

So, by faith let’s worship now. And when life gets confusing, let’s remember our stories are a small part of His great story. And God’s story is bigger than a lifespan.

And we know that God causes everything to work together for the good of those who love God and are called according to his purpose for them. For God knew his people in advance, and he chose them to become like his Son, so that his Son would be the firstborn among many brothers and sisters. And having chosen them, he called them to come to him. And having called them, he gave them right standing with himself. And having given them right standing, he gave them his glory” (Romans 8:28-30 NLT).

God’s sovereignty means no matter what you endure here, a “happily ever after” awaits you.

God's sovereignty means no matter what you endure here, a happily ever after awaits you. #hope Click To Tweet

Enjoy the dance between God’s sovereignty and human responsibility in the story of Ruth and Naomi in Little Women, Big God —on sale now on Amazon. This is a prefect read for Easter. It includes the story of Mary, who stuck by her Son through the cross to the forming of the church.

Photo by Ali Yahya on Unsplash