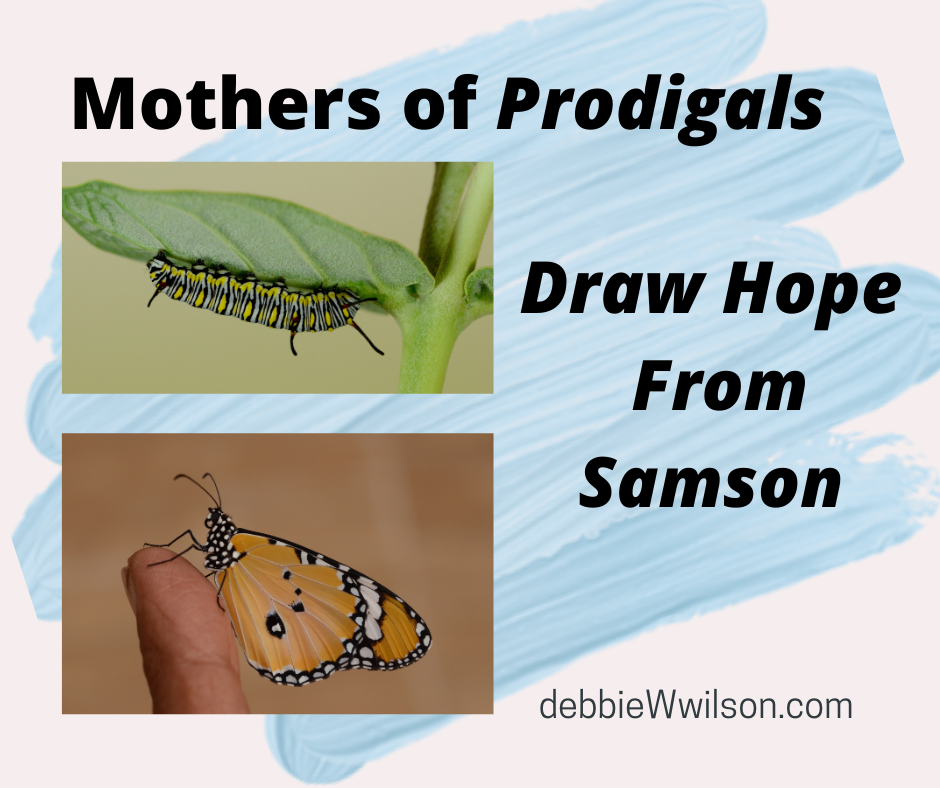 The smell of burning sacrifices made it impossible for Samson to ignore the Philistines’ celebration. He hung his head. It’d taken blindness and captivity to open his spiritual eyes and loosen the bonds of his self-centeredness.

His mother’s eyes had shone every time she said, “The Lord himself has chosen you to be his special servant to rescue Israel from the Philistines.” How had he not noticed when she stopped reminding him of his calling?

Philistine cheers jolted him from his thoughts. Maybe he could still do something. “O God, please strengthen me just once more,” he prayed.

Hebrews 11 names Samson in its list of those commended for their faith. His backstory seems to show more flaws than faith. If I were listing examples of faith, I’d hardly include Samson. Yet, God did. Samson’s story offers hope for fathers and mothers of prodigals.

A Promising Beginning and Messy Middle

The angel of the Lord appeared to Samson’s mother and said, “You are barren and childless, but you are going to become pregnant and give birth to a son. …He will take the lead in delivering Israel from the hands of the Philistines” (Judg. 13:3–5).

What high hopes these words must have raised in Samson’s parents. The Lord had set apart their son from the womb to the tomb to be his special servant. Samson’s parents were devout followers of Yahweh. His mother followed the strict Nazarite diet. His father Manoah prayed for instructions on how to bring up their son.

Besides providing nurturing parents, the Lord endowed Samson with special gifts to lead Israel and deliver her from her enemies. Yet Samson squandered his gifts on personal grievances and immoral living. Samson thought he could keep bad company and not get hurt. He paid dearly for his foolishness.

Samson’s downward slide began when he neglected his Nazirite calling. He went into vineyards and feasted for seven days, which probably included consuming wine or grapes which were forbidden to Nazarites (Judg.14:5). He ate honey out of a lion’s carcass (14:9) when he wasn’t supposed to touch anything dead. The man visited prostitutes. Finally, he gave the secret of his strength to his enemy (16:17–20). He served his lusts instead of the Lord.

Like a caterpillar that shows little resemblance to its butterfly parents, Samson spent most of his life crawling in the caterpillar stage. Finally, in the prison of his enemy he sprouted wings.

Like a caterpillar that shows little resemblance to its butterfly parents, Samson spent most of his life crawling in the caterpillar stage. Finally, in his enemy's prison, he sprouted wings. #RefreshingFaith #hope Click To Tweet

Power Prayers for the Fathers and Mothers of Prodigals

Despite Samson’s flaws, the author of Hebrews wrote, “God is not ashamed to be called their God” (Heb. 11:16). God remembered Samson’s faith, not his flops.

Despite Samson’s flaws, the author of Hebrews wrote, “God is not ashamed to be called their God” (Heb. 11:16). God remembered Samson’s faith, not his flops. #hope #parenting Click To Tweet

Like Samson, we have a holy calling. God has made us priests, and He’s given us authority to pray for our children (1 Pet. 2:4-5). Put your loved one’s name in the scriptures below and pray in faith for your prodigal.

Those who neglect their holy calling and squander their gifts on selfish pursuits, like Samson, suffer loss. But, they can return to the Lord and be transformed into the butterflies God’s created them to be.

Samson’s story ends with hope. His great fall awakened his faith. Despite all the wasted years, the prayers of Samson’s parents were answered. Samson died in faith carrying out the prophetic word concerning him.

This is the confidence we have in approaching God: that if we ask anything according to his will, he hears us. And if we know that he hears us—whatever we ask—we know that we have what we asked of him” (1 Jn. 5:14-15 NIV).

Recording—Especially for Mothers of Prodigals

My friends, Melissa Henderson and Monica Schmelter shared their journeys as mothers of prodigals at the Knowing God Zoom luncheon this Wednesday May 5. Click here to listen.

Thursday Evenings: 7-8:30 P.M., beginning Thursday May 13 that runs twelve weeks through the summer. Our daughter Ginny Wilson will be leading a Zoom study for women on Victory Over the Darkness by Neil Anderson. Contact us to reserve your seat.

Photos by Bankim Desai on Unsplash