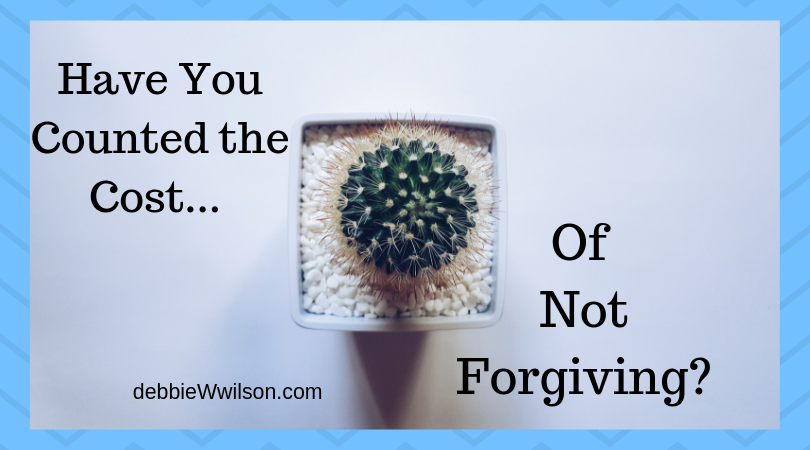 “Fair is what comes to the state fairgrounds once a year,” a friend’s divorce attorney said. Many things in life don’t seem fair. And forgiveness is one of them.

If you forgive the person who owes you $30,000, money won’t magically appear to replace what’s lost. They spent your money, and you go without. That’s not fair.

If someone maligns your reputation, steals your business, your innocence, or your spouse, forgiving won’t restore these losses. That’s not fair. They did wrong, and you pay the price.

Some consequences can’t be retracted even if the perpetrator wants to undo what happened. So how do we satisfy our sense of justice and forgive when the wrong cost us so much?

We’re working our way through the process of forgiving by spelling FREEDOM. Last time we looked at the obstacle of Emotional pain. Today we tackle the second E in FREEDOM. Forgiveness is Expensive.

The High Cost of Forgiveness

Jesus illustrated the high cost of forgiveness in Matthew 18:23-35. A servant owed his king a huge debt he could never repay. When he heard that he, his wife, and his children were to be sold as slaves along with all he owned in order to pay what he owed, he fell on his knees and begged for mercy.

The servant asked for more time. The king knew an extra 100 years at his salary would not make a dent in his debt. Yet he mercifully forgave the total debt knowing the cost.

What Our Sin Cost Jesus

The king in this story doesn’t represent us. He depicts God. We, like the servant, owe God a debt we can never repay. To forgive us cost God His only Son. Forgiveness is expensive.

You may not see yourself as owing God much. You never intentionally hurt anyone like the person who wronged you. Let’s look at that.

You and I will never go to hell because someone sinned against us. But Jesus suffered hell because of our sin. Christ paid for the sins committed by us and against us. Our sins cost Him much more than any person’s wrong will ever cost us.

It was expensive for God to forgive our sins. And it costs us to forgive another’s offense, but to not forgive costs more.

It was expensive for God to forgive our sins. And it costs us to forgive another’s offense, but to not forgive costs more. #forgiveness Click To Tweet

Who Are the Tormentors?

After having his family rescued from a life of slavery, how would you expect this forgiven servant to act? This man stuns us by trying to collect the debts owed him. When the king heard how the one he’d forgiven had thrown his fellow servant into prison, he called him “wicked” and turned him over to the tormentors. It is evil for the one who has tasted grace to not forgive others in return.

Then the master called the servant in. ‘You wicked servant,’ he said, ‘I canceled all that debt of yours because you begged me to. Shouldn’t you have had mercy on your fellow servant just as I had on you?’  In anger his master handed him over to the jailers to be tortured, until he should pay back all he owed” (Matt. 18:32-34 NIV).

Anyone who has sheltered resentment knows its vicious lashes. Every time we see or think of the one who hurt us, we—not they—suffer. Bitterness torments the one who harbors it.

We Can Afford to Forgive!

Because Christ forgave our great debt we are debt-free. Collecting an apology, acknowledgment of wrong, or anything else won’t enrich us. Our King—not the person who wronged us—supplies everything we need.

If it feels unfair and expensive to forgive, consider the cost of unforgiveness. Is it fair not to forgive when we’ve been forgiven so much more?

Join us next week as we process forgiveness. It’s time to “Do it.”

Find the first post in the forgiveness series here. Continue the series with How to Forgive: Let’s Do It!

Photo by timJ on Unsplash