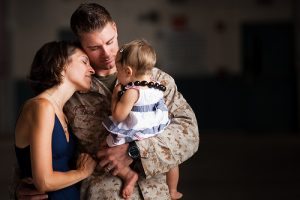 Capt. Lucas Frokjer, officer in charge of the flightline for Marine Heavy Helicopter Squadron 463, reunites with his family after returning from a seven-month deployment with HMH-463. The squadron arrived at Hangar 105 Sept. 17 and were welcomed home by a large crowd of family and friends. The squadron was replaced by HMH-363 who deployed to Afghanistan in August in support of Operation Enduring Freedom.