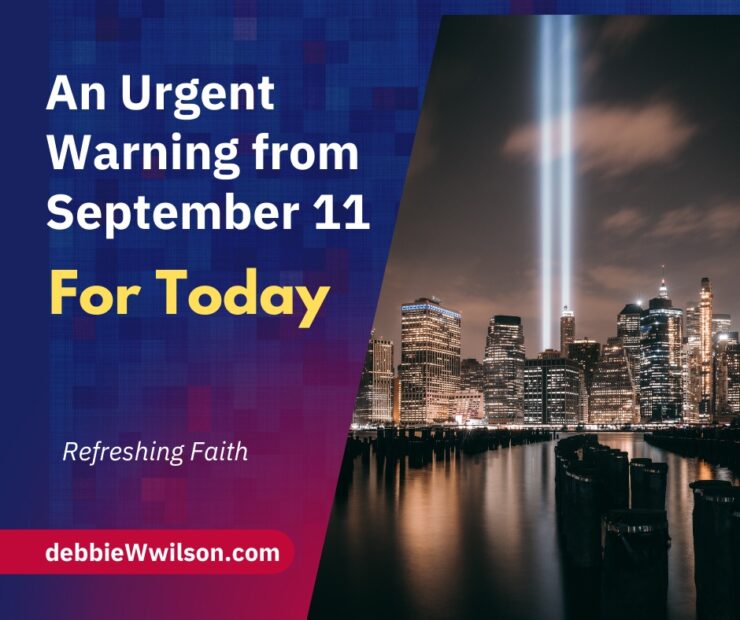 It started off like an ordinary day. No one predicted the horror and heroism that would unfold September 11, 2001. This week marks the twentieth anniversary of 9/11. Do you remember where you were when you heard? Let’s look back and apply the experience to today.

“Tomorrow’s September 11,” I told our daughter on the tenth anniversary.

“Did you know our center answered the flight attendant’s call that day?”

My daughter works for American Airlines. She considered what it would be like to receive a call from a plane hijacked by terrorists on a suicide mission. The thought sobered us.

Airline agents weren’t trained how to handle calls taken from hijacked planes. Like many tragedies, this one seemed to hit without warning.

After 9/11, church attendance soared. Since “Righteousness exalts a nation, but sin condemns any people” (Pro. 14:34 NIV), we prayed our nation would wake up and turn to God. Sadly, piety didn’t last. We wanted God’s protection—not Him.

The 9/11 attack appeared to lack forewarning, but Jonathan Cahn in The Paradigm tells how US intelligence warned the previous administration of Osama Ben Ladin’s threat and presented eight opportunities to remove him. President Clinton dismissed them all.

Our country is worse off now than after 9/11. Instead of drawing together as one nation under God, we’ve splintered over everything from masks to CRT and the use of personal pronouns.

And we’ve been warned.

To use one of my mother’s phrases, our world has gone to pot. After the recent horrors in Afghanistan, this September 11 cuts deeper than most for those who lost family members, buddies, and limbs there. But it’s no surprise to God.

Psalm 2 depicts the nations conspiring against the Lord. God laughs at their plans to overthrow Him and His ways. (Just Google, “How many genders to get an idea of the craziness.)

Submit to God’s royal son, or he will become angry,
and you will be destroyed in the midst of all your activities—
for his anger flares up in an instant.
But what joy for all who take refuge in him!” (Ps. 2:12 NLT).

In an instant, the Son will act. Like Aslan in Narnia, He’s poised to return and set all things right.

During the forty days between Jesus’s resurrection and ascension into heaven He taught His disciples (Acts 1:3). He could have focused on His sensational experience of suffering and overcoming death. While He proved the validity of His resurrection, He taught on the kingdom of God including what many call the millennial kingdom—Jesus’s 1000-year reign on earth. Considering today’s news, picturing Jesus ruling the world thrills me!

Jesus replied, ‘I assure you that when the world is made new and the Son of Man sits upon his glorious throne, …everyone who has given up houses or brothers or sisters or father or mother or children or property, for my sake, will receive a hundred times as much in return and will inherit eternal life. But many who are the greatest now will be least important then, and those who seem least important now will be the greatest then” (Matt. 19:28-30 NLT).

Noah warned his generation for 120 years—yet his warning, like the one concerning attacks on our country—fell on deaf ears. “People didn’t realize what was going to happen until the flood came and swept them all away. That is the way it will be when the Son of Man comes” (Matt. 24:39 NLT).

But the day of the Lord will come like a thief. The heavens will disappear with a roar; the elements will be destroyed by fire, and the earth and everything done in it will be laid bare” (2 Pet. 3:10 NIV).

Unlike the airline agents on 9/11, we’ve been forewarned (1 Thes. 5:1-11). Those who listen, like Noah, will escape the coming wrath of God’s judgment.

After that, we who are still alive and are left will be caught up together with them in the clouds to meet the Lord in the air. And so we will be with the Lord forever” (1Thes. 4:17 NIV).

“Therefore, dear friends, since you have been forewarned, be on your guard so that you may not be carried away by the error of the lawless and fall from your secure position. But grow in the grace and knowledge of our Lord and Savior Jesus Christ. To him be glory both now and forever! Amen” (2 Pet. 3:17-18 NIV).

To hear the heroic testimony of a former soldier who organized what began as the evacuation of his translator’s family and grew into the rescue of over 30,000 people from Afghanistan, click here. (Chad Robichaux starts around 8.11). Support Chad’s efforts to rescue our allies here.

Thursday Evening Fall Bible Study for Women: Our daughter Ginny Wilson will be leading a Zoom study this fall. The group will go through Henry Cloud’s book Never Go Back. He looks at the top 10 awakenings we need to be successful and walks us through the key areas that hold people back from enjoying the freedom and abundant life Jesus died to give us.

The group starts September 16th. It runs 14 weeks and meets on Zoom Thursdays at 7 p.m. EST. Let us know if you are in so I can add you to the group.

Photo by Lerone Pieters on Unsplash