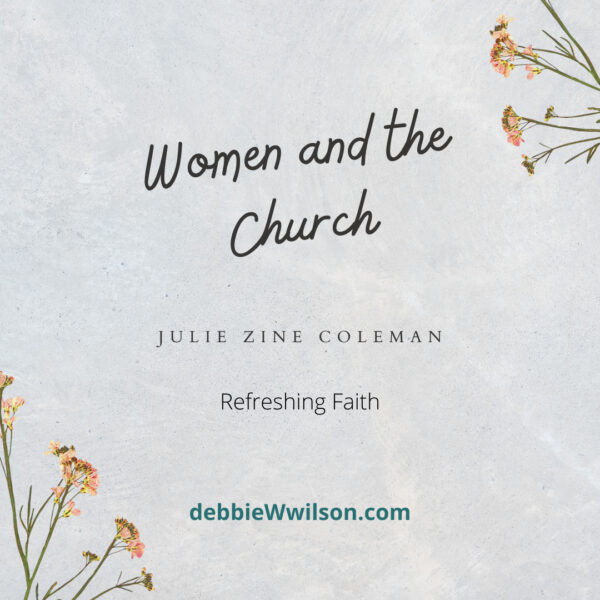 Being a woman with the spiritual gifts of teaching and leadership, when the Lord called me into ministry I ran into Christian leaders who believed the Bible confined women to the nursery or the kitchen. Worse, as a counselor, I met women whose pastors stood behind their abusive husbands. Such misunderstanding and misinterpretation of Scripture has harmed many in the body of Christ, and not just women.

I’m delighted that Julie Zine Coleman has tackled the thorny topic of Women and the Church with grace and truth in her new book On Purpose. Her thoughtful research of church history and her study of the Scriptures will bless you. Now here’s Julie…

He cornered me in the snack bar after chapel. At the camp director’s request, I had just led the singing that evening for the new group of campers and counselors at Boy’s Camp. I had been initially reluctant to lead in front of a group of men, believing that the Bible restricted women in that way. But they were desperate. There was no one else. I would not be “usurping authority,” they assured me. The camp oversight was asking me to do it.

But the speaker didn’t see it that way. Beet red in the face, barely controlling his anger, he confronted me. Why would I ever think it appropriate to lead men? He then went on to lecture me on what Scripture teaches about women (like I hadn’t heard it my whole life long) and had me reduced me to tears by the time he was done.

I Tried to Explain

I tried to explain, but he was having none of it. That was it for my new assignment. The camp did without a competent song leader for the rest of the two weeks. Having no one was better than having a woman.

This was one of many incidents that made me question the many restrictions placed on women in most conservative denominations at that time. Please understand, I knew the Scriptures cited for those limitations almost as well as John 3:16. My problem was I was a born leader. It came out my pores. So I was constantly banging my head on that glass ceiling.

I often wondered why God would have made me the way I was, if I had to worry every time I used my spiritual gifts. I lived in constant fear of crossing the line to inappropriate.

That was in the 1970’s. Much has changed in society since my college days. Women now hold key leadership positions in business, in politics, and enjoy respect by society in general. Equality has been reached on many levels. But not in the Church.

It has been said that the Church is always arriving thirty years late and out of breath. But in this case, traditional roles have been dictated by Scripture, which is timeless and far above any cultural determination. Right? But does Scripture really teach limitations? Or is the traditional position in reality an interpretation of God’s Word, subject to human error or misunderstanding?

Are These Limits on Women in the Church Based on Scripture or on a Traditional Interpretation?

Anyone studying Scripture has factors that can keep them from a correct understanding. Basic beliefs that we have been taught from an early age, be they right or wrong, become the foundation and filter for any additional knowledge we may gain.

Our tightly held assumptions are the lens through which we see the world. Our experiences chime in as well. Past hurts or successes will color how we receive information. In part, those things have made us into who we are today. 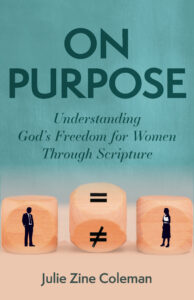 So, while Scripture is God’s Word, divinely inspired, accurate and powerful, human interpretation is not. An interpreter is always affected by their core beliefs. We all view the world and even the Bible through a certain lens.

My passion for this subject comes from a concern that we have gotten it wrong. I ache for future generations whose culture has moved on, giving them a freedom in secular society that the Church will unnecessarily not allow.

I have seen women told to stay in abusive marriages while their church leadership tiptoes around the abusers, refusing to hold them accountable. Too many people leave Christian fellowship because of their disillusionment with how women are treated by the body.

Worst of all—I have seen women walk away from God, because they believe He thinks of them as second-class citizens in His kingdom.

Now more than ever, we need to get to the bottom of these passages. Truth will set us free every time. What does God have to say about women’s place? It’s time to dig in. You might well be surprised. 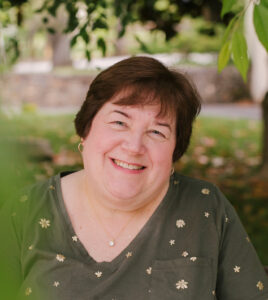 Julie Zine Coleman helps others to understand and know an unexpected God. A popular conference and retreat speaker, she holds an M.A. in biblical studies. Julie is the managing editor for Arise Daily. When she is not glaring at her computer, she spends time with her grandchildren, gardening, or crafting. More on Julie can be found at JulieZineColeman.com and Facebook.

Julie’s new book, On Purpose, is a careful study of the passages in the Bible often interpreted to limit women in the church and home. Each chapter reveals timeless biblical principles that actually teach freedom, not limitation.