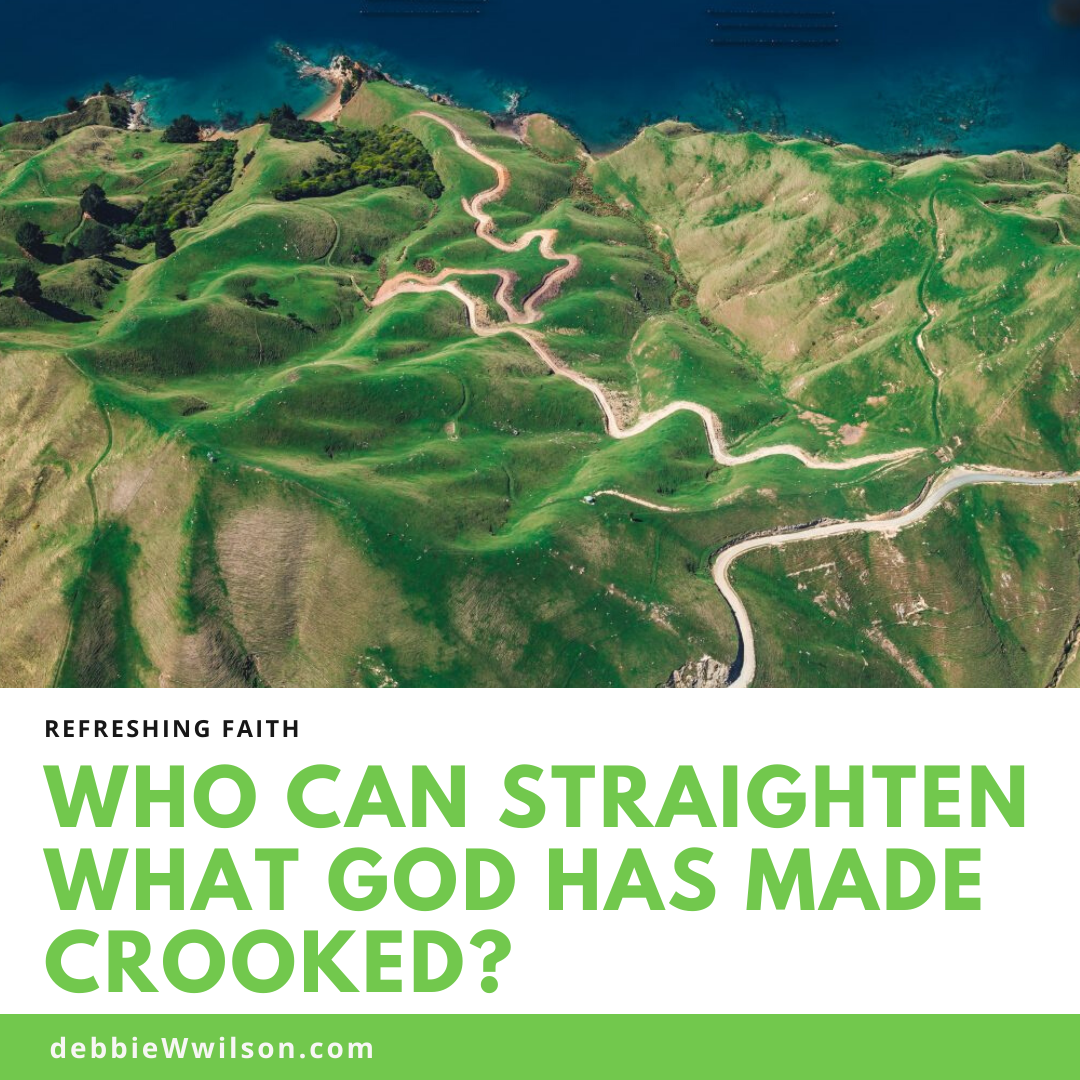 Have you ever wondered why God allowed the COVID-19 virus to stop the whole world—and your world in particular? Or perhaps your life has been hijacked by another issue. Has He lost control? What good can come from this?

As one who values efficiency, I don’t respond gracefully to setbacks. I prefer McDonald’s jingle, “You deserve a break today.” But biblical and secular history show life doesn’t flow in a straight line. Like a good novel, real life packs in its share of twists and turns.

So how should we respond to obstacles? Ecclesiastes 7:13 offers this intriguing advise.

Accept the way God does things, for who can straighten what he has made crooked?” (Eccles. 7:13 NLT)

“Accept the way.” If I know God is behind something, that is one thing. But does this verse include things that happen because of sin, storms, and sickness?

Learning Curves in the Road of Life

Some setbacks come from inexperience. God created growth to be a process. We glean some lessons only through living. So instead of bemoaning life’s learning curves, lean into them. Collect all you can from the delays.

Storms that Rain on Our Parade

But what about storms, viruses, and the sins of evil people? Are these crooked things under God’s realm?

Joseph enjoyed the position of being Jacob’s favorite son. When he received the dreams showing him ruling over his family, he may have felt comfortable with this role. But the dreams omitted the mountain he’d have to climb and the valleys he had to traverse.

Before Joseph can blink, his brothers are discussing how to kill him and he’s being carted off to a foreign country. Potiphar, the captain of Pharaoh’s guard, purchases him to be his slave. Joseph works his way up to being in charge of his household. Not Joseph’s ideal role, but he’s exercising his leadership skills and enjoys his master’s favor—but not for long.

His handsome appearance captures the attention of Potiphar’s wife. When Joseph spurns her attempts to seduce him, she accuses him of her sin. It’s a slave’s word against the wife’s. Probably as much to save his reputation as anything else, Potiphar throws Joseph into prison.

Joseph languishes in chains for years, seemingly forgotten by God and his family, before Pharaoh makes him second in command in Pharaoh’s palace. He is eventually reconnected with his family and receives the double blessing traditionally reserved for the firstborn son. What I describe in a few paragraphs took decades.

God’s plan was much greater than Joseph could have pictured. God used Joseph to save the line through which Jesus would be born! Yet it cost more to achieve than he could have fathomed.

Who Is in Charge?

But wait. Was this crooked path God’s plan? Read the following from Psalm 105.

He [God] brought famine to the land
He took away their food supply.
He sent a man ahead of them.
He sent Joseph, who was sold as a slave.
They hurt his feet with shackles, and cut into his neck with an iron collar.
The Lord’s promise tested him through fiery trials until his prediction came true.
The king sent someone to release him.
The ruler of nations set him free.
He made Joseph the master of his palace and the ruler of all his possessions.
Joseph trained the king’s officers the way he wanted and taught his respected leaders wisdom” (Ps. 105:16-22 GW).

God’s route for Joseph included the sharp twists of betrayal, separation, famine, chains, and prison. No one could have straightened this jagged path. Not Joseph, not his father Jacob.

God’s route for Joseph included the sharp twists of #betrayal, separation, famine, chains, and prison. No one could have straightened this jagged path. Not Joseph, not his father Jacob. #hope Click To Tweet

Ecclesiastes says to “accept the way God does things.” God used Joseph’s years as a slave and prisoner to transform him into a man of strength. If Joseph and Jesus learned obedience from what they suffered (Heb. 5:8), do I think I can take a shortcut?

If Joseph searched for what he could have done differently to skip slavery and prison, he realized he couldn’t have smoothed God’s path for him. Every dip and bend fell under the watchful eye of His loving heavenly Father. Suffering was necessary for greatness (Rom. 8:17).

Has some setback caused you to question your calling or God’s love? Have you tried to smooth the sharp turns out of life? Are you fretting over this quarantine or something else? Take heart from Joseph and accept the way God does things. His plans are greater than yours. He’s at work in the crooked part of your journey too.

Take heart from Joseph and accept the way God does things. His plans are greater than yours. He’s at work in the crooked part of your journey too. #trust Click To Tweet

Photo by Alex Siale on Unsplash