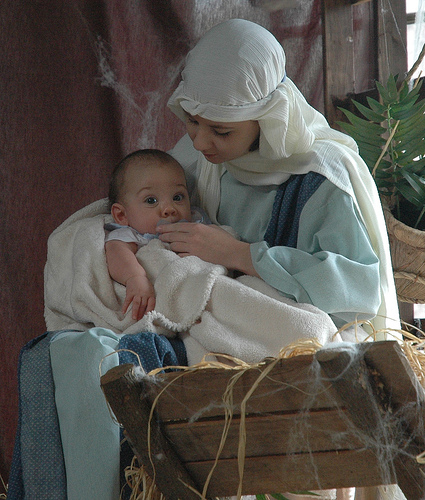 Recently I was pondering the angel Gabriel’s words to Mary that first Christmas. “For nothing will be impossible with God,” (Luke 1:37). In other words, Mary, you’re right, it is impossible for you, a virgin, to have a baby. But it’s not impossible for God to give you one.

Hebrews 13:8 says “Jesus Christ is the same yesterday and today and forever.” What does it mean to know the God of the impossible? God showed me a practical example through my daughter’s experience this week.

Ginny works in the reservation department for an airline. She assists frequent fliers who want to redeem their points to purchase tickets for international flights. The airlines release only a certain number of seats on each flight for point-users.

A customer asked her to help him find a flight for his daughter. She wanted to return home to Switzerland from the US on January 1st with her husband and two small children.

To find a flight for four using travel points for January 1st—impossible, or so Ginny thought. To confirm her thoughts, the man said he’d spent hours on the phone earlier with another agent.

“Well,” the man said, “I prayed before I called.” He then told Ginny that earlier that day the doctors had told his wife she had only a week to live. His daughter’s family was coming to say goodbye to her mother.

“Jesus is my Savior,” Ginny told the man.

He opened up with Ginny. He told her how his wife had encouraged the doctors when she’d received the prognosis. “Don’t feel sad for me. I know where I’m going. Do you know Jesus?”

Ginny told the man about In Light of Eternity, Randy Alcorn’s book on heaven. He promised to read it. They shared a little longer.

After Ginny ended the call she told Larry and me about it. The three of us wept together to witness God’s tender mercies on a man and his family stunned by grief.

Some may feel the God of the impossible should heal the man’s wife. God could do that. But we know we all must die sometime. If this is her time, how sweet to witness God’s supernatural peace and grace through the process.

“For nothing will be impossible with God.” The miracle of Christmas brings practical hope to every day for those who carry Christ in their hearts.

What impossible challenge are you facing? Will you trust the God of the impossible to see you through?