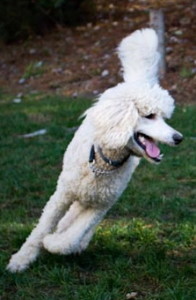 The grace and beauty of Max’s movements captivate me. I think of a thoroughbred racehorse when he gallops across our yard, head and tail held high. But lately, something has been wrong. He’s stood at the window and watched Cossette, his younger half-sister, romp.

My twenty-two month old standard poodle is aptly named. Besides his giant size, 27 ½ inches at the withers, Maximus is the most regal and affectionate pet I’ve ever had. He’s also the biggest goof ball.

After Cossette was spayed, he gently rested his head over her sedated body. When she bounced back, he yanked that annoying protective cone off her head.

Last week we almost lost our gentle giant. Over the weekend he became extremely listless. On Monday the vet said Max had renal failure. On Tuesday, they suspected  Addison’s disease. END_OF_DOCUMENT_TOKEN_TO_BE_REPLACED