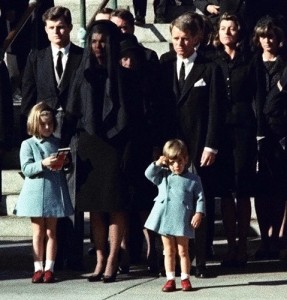 November 22, 1963 stands out as one of our nation’s saddest moments. Those of us alive at that time remember where we were when we heard the chilling news that President John F. Kennedy had been assassinated.

President Kennedy personified power and charisma. Bodyguards surrounded him. If the most powerful and protected man in the world couldn’t be saved from an untimely death, what did that say about Larry’s vulnerability? Larry couldn’t shake the worry: What would happen to me if I died?

My husband grew up in a family who attended church and believed in Jesus. But Larry’s family’s faith didn’t take away his doubts about his own eternal destiny. That night Larry couldn’t sleep. He needed to settle this nagging question about his eternal security.

Larry tiptoed into his parents bedroom and roused his dad. He told him he was afraid to die. Mr. Wilson reminded Larry of John 3:16, “For God so loved the world, that He gave His only begotten Son, that whoever believes in Him shall not perish, but have eternal life.”

“Would you like to be sure you’ll have eternal life if something happens to you?” he said.

“I sure would!” Larry said.

Larry prayed that night and asked Jesus to give him eternal life. He thanked Him for paying the penalty of his sins and asked him to forgive him of all the wrongs he had or ever would commit. He asked to experience the free gift of eternal life.

Larry says he lost something the night JFK died. He lost the crippling fear of death.

One day all of us will lose our life here on earth, no matter how protected, wealthy, or healthy we are. President Kennedy’s tragic death fifty years ago changed Larry’s life. Larry realized his own vulnerability and discovered eternal life.

Question: Where were you the day JFK died? Have you settled the question of your own eternal security?

Photo by: thesmuggler- Night of the Swallow”