“Lust brought us together. We never should have married. I want a divorce.” 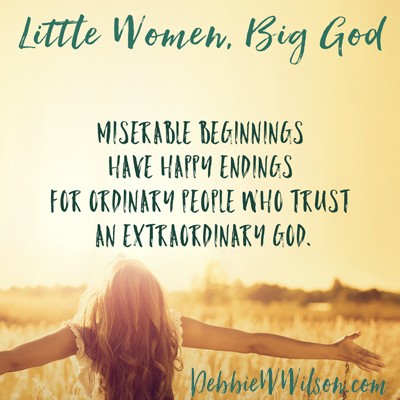 My client thought her conclusion was airtight. Divorce was the only solution to a marriage founded on such a flimsy foundation. But she hadn’t added God into her equation.

Many women have told me that even though they willingly participated in premarital sex with their husbands, they later felt used. They regretted their consent. They wished their husbands had led their dating relationship in sexual purity. Guilt’s fangs now bit into their intimacy.

Thankfully, God is bigger than our failures and weaknesses. He took David and Bathsheba’s marriage, which began with adultery, murder, and an unwed pregnancy, and turned it into a partnership of mutual love and respect that produced kings in the lineage of Christ. He wants to redeem our bad starts, too.

Bathsheba’s challenges relate, in some degree, to all of us. Who hasn’t had to forgive? Who hasn’t battled self-defeating thoughts? The essential life skills Bathsheba’s drama offers help us know how to move from victim to super-conqueror in our own challenges.

David and Bathsheba show that marriages with poor beginnings can succeed. As both partners grow, forgive, and show preference to one another, the relationship transforms to reflect the individuals’ improved character. Change begins with repentance—a change of heart that leads to change of behavior. If the heart doesn’t change, then new behavior will be short- lived. David’s cold heart had Uriah carry the letter that bore his own death sentence. David’s renewed heart led him to fast and pray for the life of his infant and write psalms to the Lord. Bathsheba witnessed David’s genuine brokenness and opened her heart to him.

God blessed their union with four sons. Solomon became Israel’s grandest and wisest king. He built God’s temple and wrote Song of Solomon, Ecclesiastes, and much of Proverbs. Jesus received his right to the throne through Solomon’s blood- line. Mary, the mother of Jesus, was a descendant of Nathan, another of David and Bathsheba’s sons.

God turned Bathsheba and David’s bad beginning into a glorious ending. Maybe you had a poor start in life, in parenting, or in personal development. Imagine how God might turn your inadequate beginning into a fabulous ending if you’ll trust him.

Ladies, if you are in the Raleigh/Cary NC area, I’d love to see you this Friday at the Knowing God Ministries luncheon.